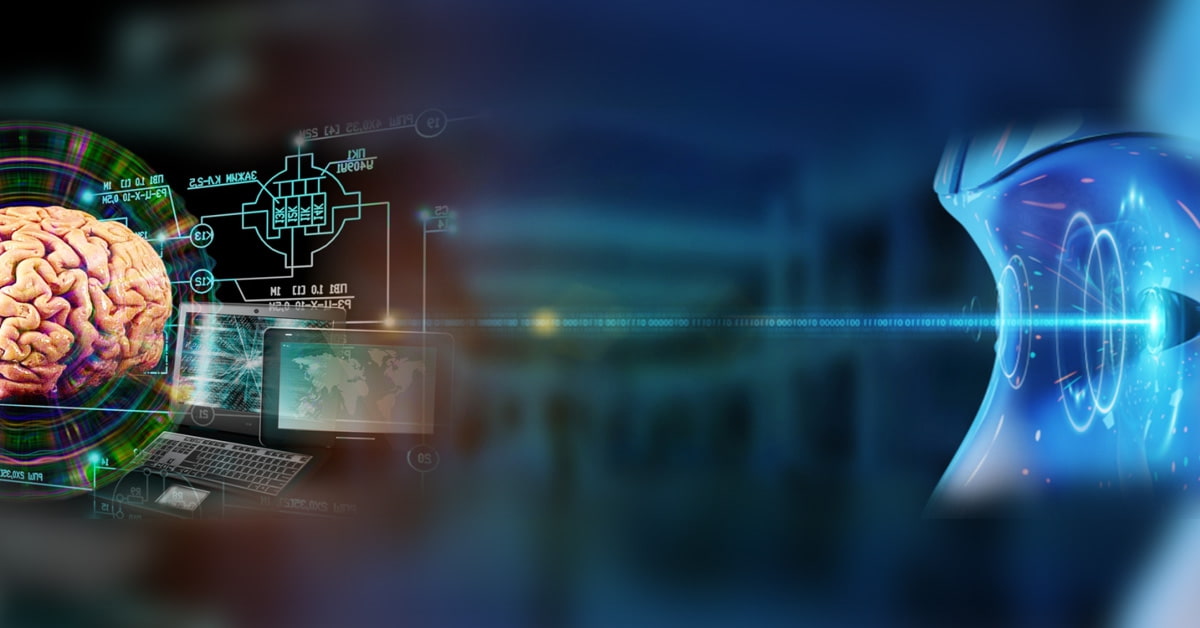 As we all know, the study of computer algorithms that automatically improve themselves through experience, is commonly referred to as Machine Learning. It is a subset of artificial intelligence. The algorithms in machine learning build a mathematical model that is created based on the training data or the data sample, and is further used to make predictions or decisions without any programming for the same.

A beginner can feel overwhelmed when starting out in the world of machine learning, it can seem very complex and tedious from the surface. However, as one delves deeper into the field, gains more knowledge and insights, machine learning can seem like a very interesting dimension to explore.

At Cognixia, we see a lot of participants who become so engaged in machine learning as they progress through the machine training sessions, that sometimes, it changes their perspective about so many things and gives them a different way to look at particular information. Over the years, having interacted with numerous participants as well as subject matter experts and trainers, we have put together a list of the top 10 machine learning algorithms below, to help ease off the jitters and help beginners on their path into the world of machine learning.

What are the top 10 machine learning algorithms every beginner must know about? 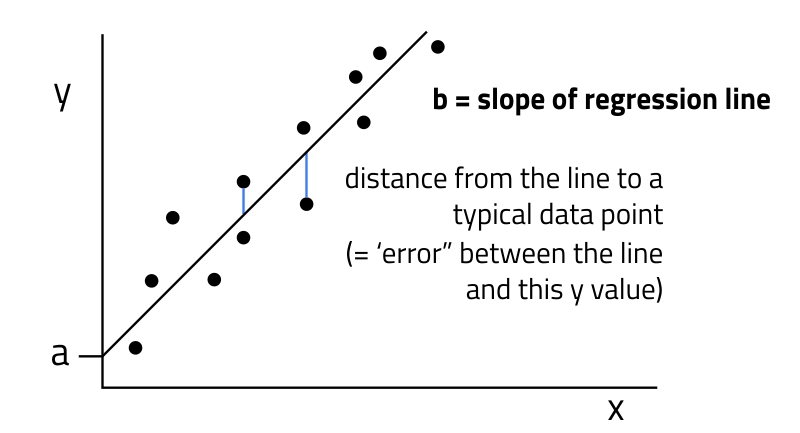 The goal of the linear regression algorithm is to find the values of coefficients ‘a’ and ‘b’. In the graph, ‘a’ would be the intercept, while ‘b’ would the slope of the line, while the goal is to fit a line nearest to most of the points, thereby reducing the error, represented by the distance, between the value of the data point y and the line.

When you use binary classification in the data, you most likely require discrete values instead of continuous values. This is where the Logistic Regression algorithm is very useful. While the linear regression yields continuous values, the logistic regression yields discrete values, after application of a transformation function. When using a binary classification, where predictions are made about whether a particular event will occur or not, logistic regressions are commonly used. The algorithm gets its name from the transformation function that is used as part of the algorithm – the logistic function represented by –

Can be transformed into:

As a result, a S-shaped curve is obtained, graphically represented as below – 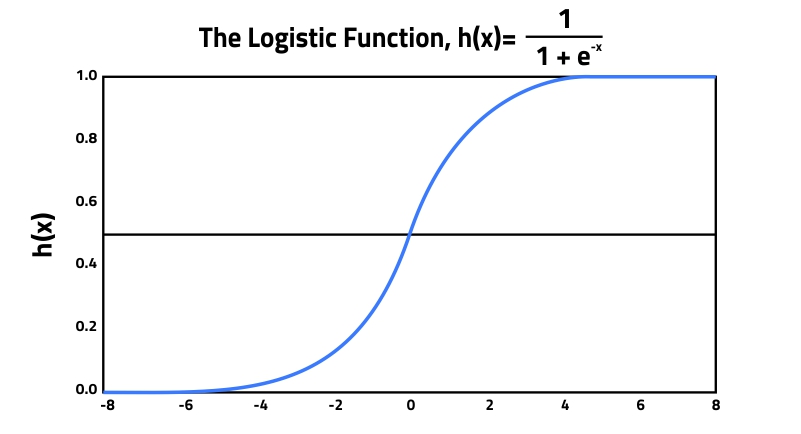 The output of a logistic regression is in the form of probabilities of the default class, and since it is a probability, its value will range between 0 to 1. The value will denote the probability of occurrence of the particular event.

The CART algorithm can be represented as below: 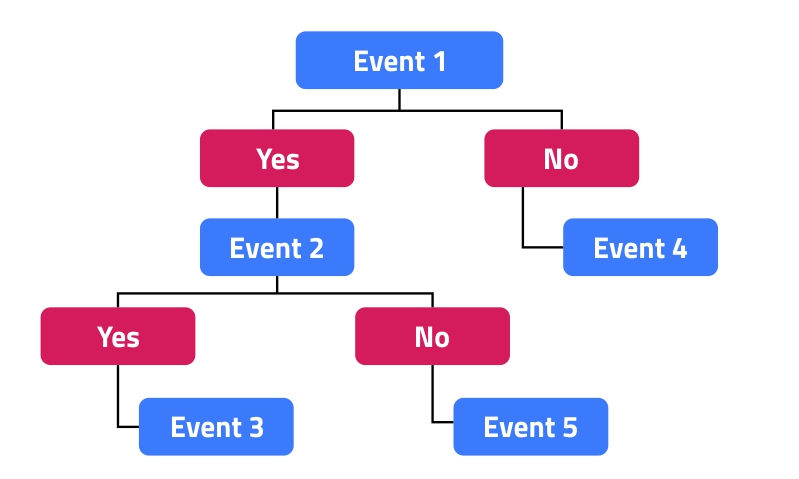 Wondering why the algorithm is called ‘naïve’? Well, that is because it assumes that all the variables would be independent of each other, which, considering the real world, is quite a naïve assumption to make.

Normally, for algorithms, the entire data set is broken down into the training set and the test set. However, for K-Nearest Neighbors or the KNN algorithm, the entire data set is used as the training set. The algorithm goes through the entire data set to find the k-nearest instances to the new instance, or the ‘k’ number of instances that are closest to the new instance, when a new instance occurs. The output received could be a mean of the outcomes in case of regression problems or a mode for classification problems. For this algorithm, the value of ‘k’ would be user-specified. In order to calculate the similarity between the instances, measures like Euclidean distance and Hamming distance are utilized.

In order to mine frequent item sets from transactional databases and subsequently generate the association rules, the apriori algorithm is used. It is a type of unsupervised learning algorithm in machine learning. It is very commonly used in the market basket analysis. The association rules are generated after the thresholds for support and confidence are crossed. 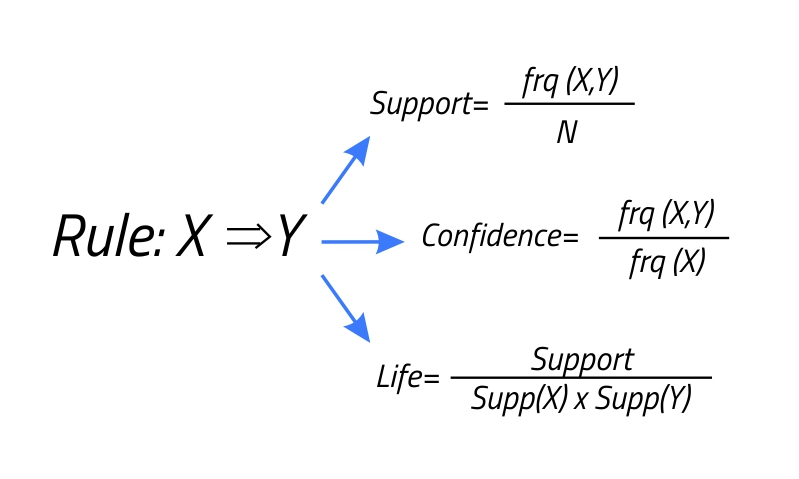 The support measure would help cut down the number of candidate item sets that need to be considered during the frequent item set generation, and it is guided by Apriori principle. According to the Apriori principle, if the item set is frequent, then all its subsets will also be frequent.

This is also a type of unsupervised machine learning algorithm and it is an iterative algorithm that groups similar data into clusters. This algorithm calculates the centroids of K-clusters and assigns a data point to that cluster in such a way that there is a least possible distance between the centroid and its data point. 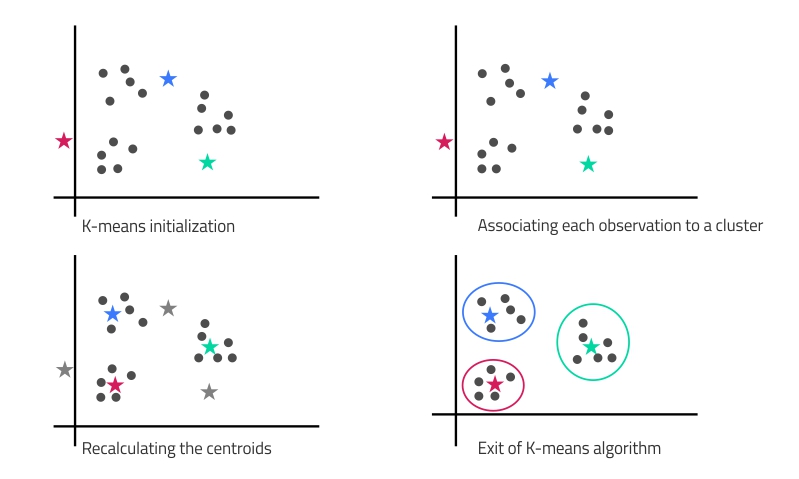 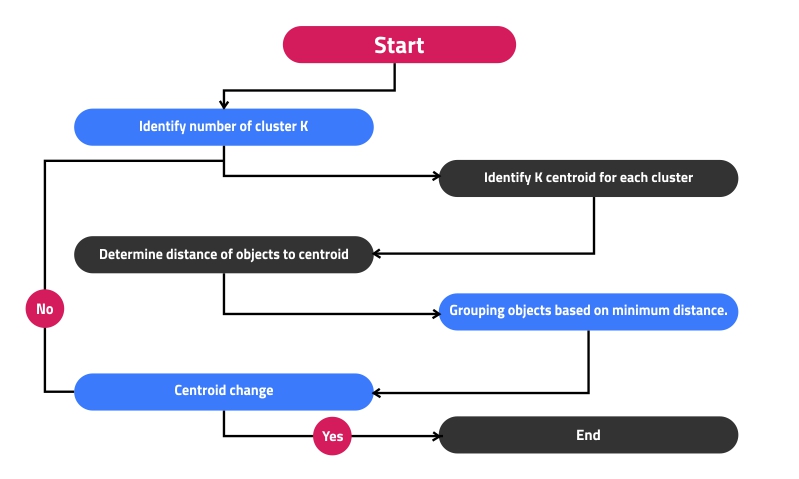 Principal Component Analysis or PCA algorithm helps make data easy to explore and visualize by bringing down the number of variables. In order to this, the maximum variance in the data is captured into a new coordinate system with aces that are called as principal components. Here, each component is a linear combination of the original variables, while being orthogonal to one another, indicating that the correlation between these components is zero.

After the bootstrap sampling is done, step 2 is to create multiple models using the same algorithm but on different generated training sets. This is where Random Forests play a role. In Random Forests, features are selected randomly for constructing the best split. Bagging after splitting on a random subset of features ensures less correlation among prediction from the subtrees.

Adaptive Boosting or Adaboost is a sequential ensemble technique. In this algorithm, each model is constructed by correcting the mis-classifications of the previous model. This algorithm involves ‘weighted voting’, in which each classifier would vote to obtain a final outcome. In this way, the final outcome is determined by the majority and yet, the sequential models have been created by assigning greater weights to misclassified instances from the previous models.

This can be visually represented as below: 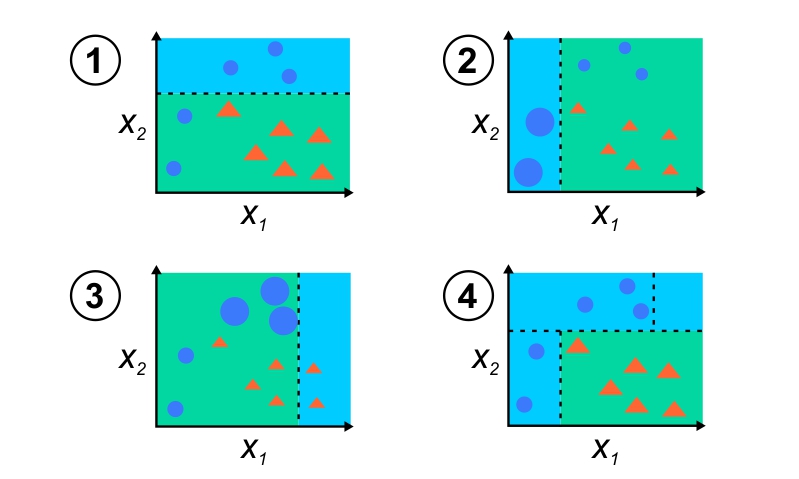 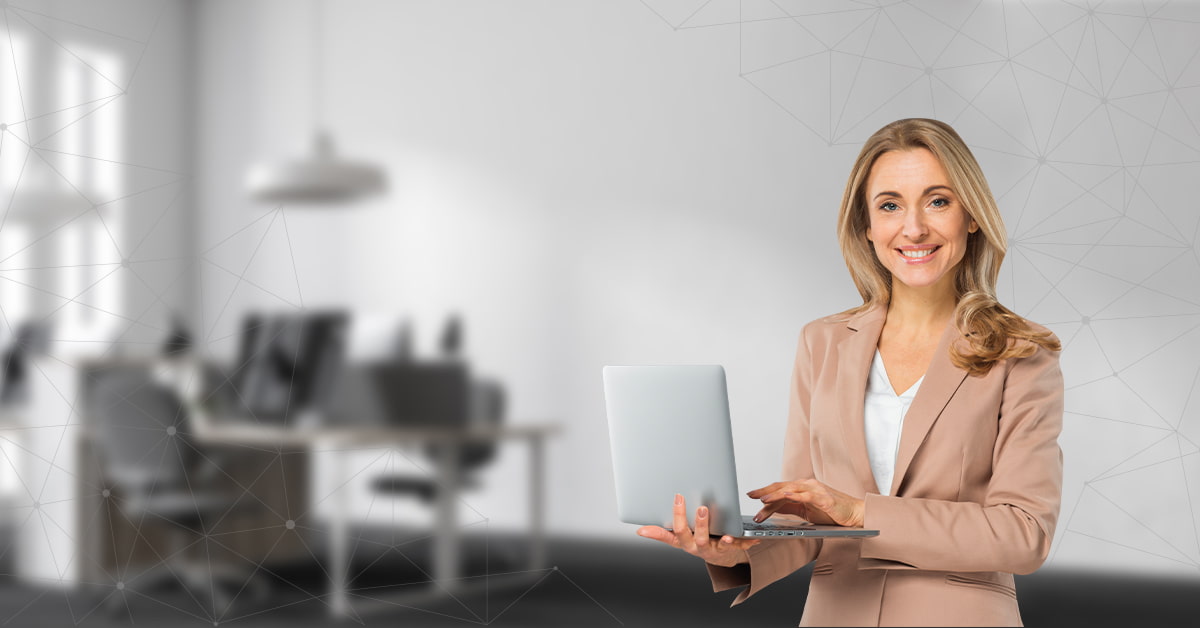 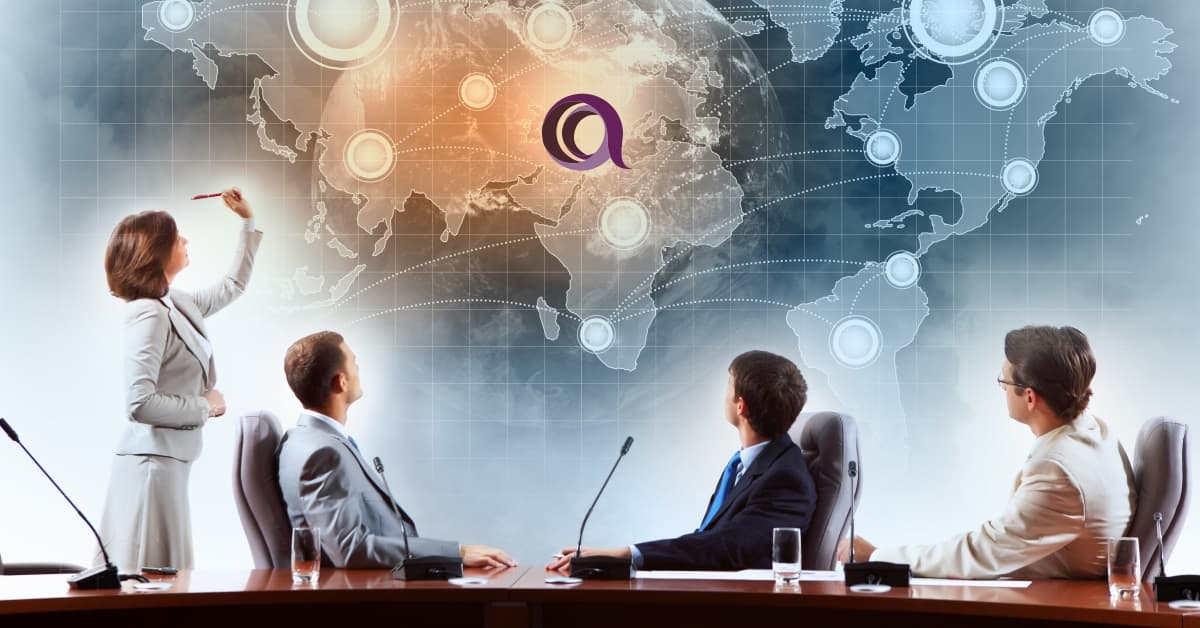 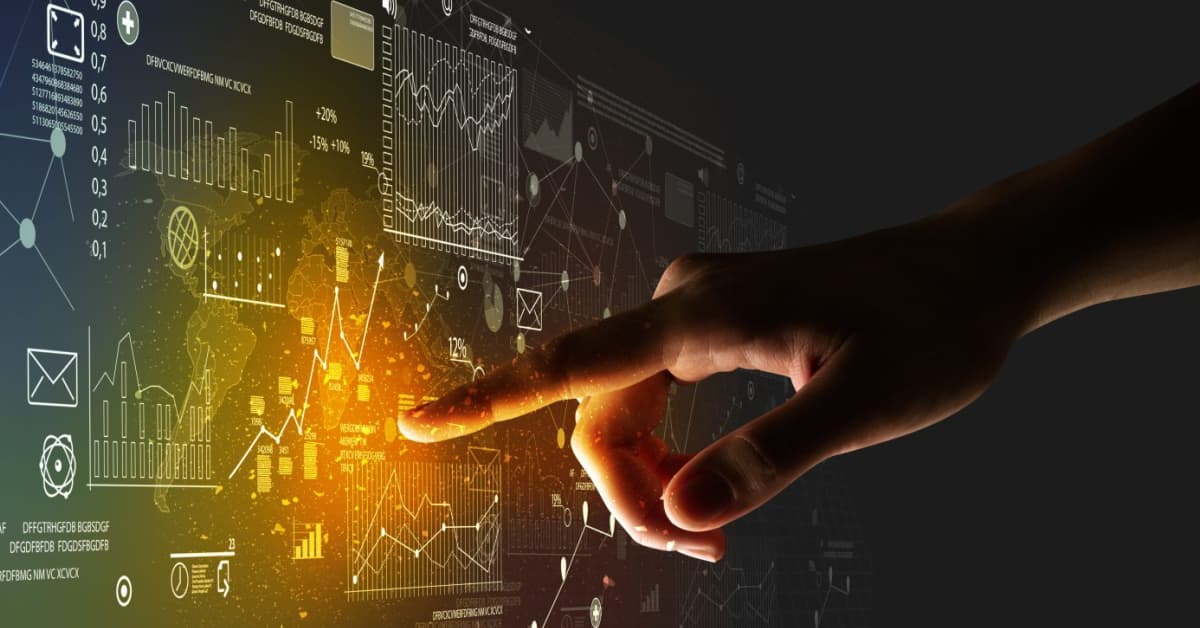